Conductor and musician Jordi Savall HAS FINISHED his proposal for a new interpretation of Beethoven’s Complete Symphonies at the Paris Philharmonic, with obviously the monumental ninth symphony, preceded by the eighth. 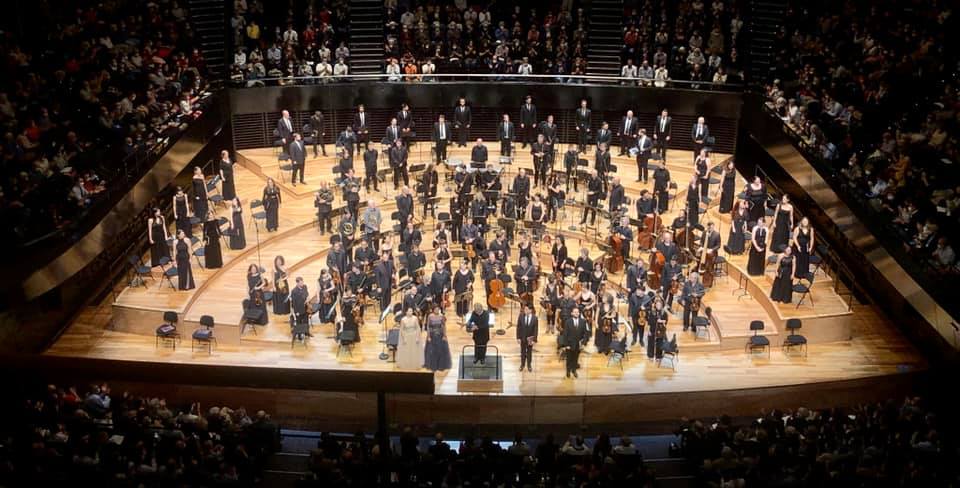 With his orchestra Le Concert des Nations and the El León de Oro Choir, the director invites you to rediscover these well-known works from a more authentic perspective, closer to the original interpretation. Jordi Savall is known and even recognized for his search for a historically informed interpretation. His work to find the right gesture in the instruments of the time, particularly the Baroque, has earned him worldwide recognition. With his assistant Luca Guglielmi, the Catalan conductor embarked on a new adventure addressing the famous Symphonies of Ludwig van Beethoven, eager to “recover the original and organic sound of the orchestra as imagined by Beethoven“. The work is meticulous, relying on ancient sources to offer a precise orchestral strength with period instruments and current tone (430 Hz) strictly following the tempos required by the composer. The versions of these symphonies, and especially the Ninth, are certainly numerous and manifest traditions of undoubtedly anachronistic interpretations, as Jordi Savall observes. But if this historically informed work is prevalent in Baroque music, even post-Baroque, it is, at least so, for pre-romantic music. Jordi Savall invites, therefore, the current public to live “this perpetual adventure of free confrontation”, to use the quote borrowed from André Boucourechliev in the libretto of his recording of the first five symphonies.

The audience came in large number and curious to attend this last concert of the cycle. From the 8th Symphony, the orchestral accents that acquire a very particular color, in particular the strong and rather dry timbales, as well as the bass with very present grain, impress. The very particular attention to the dotted rhythms (short dotted eighth note, firmly fold in place before a strong black or black) is certainly very revealing of the orchestra’s precision work, but also of a gesture that definitely belongs to another era. Under the direct, stable and attentive guidance of Jordi Savall, the 35 musicians – of Le Concert des Nations completed by talented young instrumentalists from around the world – demonstrated remarkable precision, offering a contrasting and energetic phrasing without showing brutality. Dynamics are always carried out with awareness and control. The timbre of metals, particularly of natural trumpets and horns, certainly brings a fairly new old color, which can often destabilize. The difficulty inherent in these epochal instruments does not spare some wind treble, which however know how to be relatively discreet.

The 36 artists of the choir El León de Oro are spaced among themselves but do not lose homogeneity, on the contrary, they acquire sound clarity. Surrounding the orchestra, the choir also gains a mass effect that risks covering up even the orchestra. Although the text is not very understandable, the phrases are alive.

You can find out more about which cookies we are using or switch them off in settings.

This website uses cookies so that we can provide you with the best user experience possible. Cookie information is stored in your browser and performs functions such as recognising you when you return to our website and helping our team to understand which sections of the website you find most interesting and useful.

Strictly Necessary Cookie should be enabled at all times so that we can save your preferences for cookie settings.

If you disable this cookie, we will not be able to save your preferences. This means that every time you visit this website you will need to enable or disable cookies again.